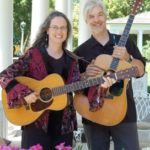 For more than 20 years, people have gathered at Dickson Mounds on the third Saturday of every month for an evening of musical entertainment. Hosted by Chris Vallillo, an accomplished musician and performer in his own right, the series features Roots/Folk music and other genres offered by a talented variety of performers.

Described as genuinely talented with classic folk voices, Patty Stevenson and Craig Siemsen are known for their gorgeous harmonies, impeccable musicianship, playful stage humor, and jewel-like original songs. Patty says about performing, “I try for magic – nothing less! For the place that opens hearts and will move an audience to tears or smiles.”

Doors open at 6:00 p.m. Adults $8, kids $5. Visit http://ginridge.com/extras/hickory-ridge-concert-series/ for information about the artists.